or the Himalayan region spans an area of more than 4.3 million square kilometres

The region stores more snow and ice than anywhere else in the world outside the polar regions, giving its name: ’The Third Pole‘.

The region contains the world’s highest mountains, including all 14 peaks above 8,000 metres,

is the source of 10 major rivers, and forms a formidable global ecological buffer. 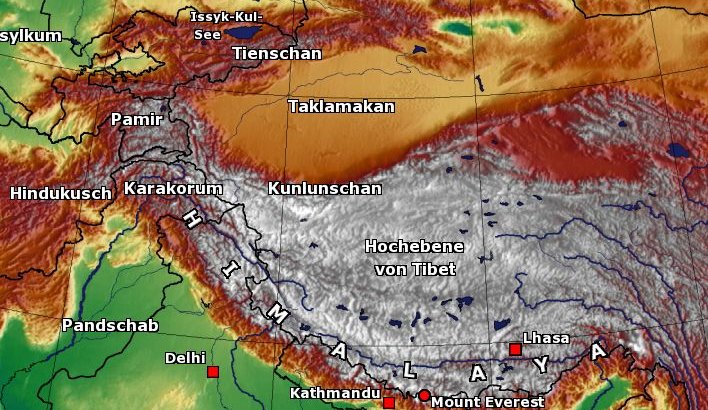 Climate change is now a key concern in the Himalaya Region.

Mountain set-ups are especially sensitive to climate change and the Third Pole area is inhabited by a populace most susceptible to these global alterations. Modifications in the river systems have had a direct impact on the contentment of a multitude of people. The rate of warming in the Third Pole is considerable more than the worldly average, and the rate is increased at an elevated altitude, indicating a more susceptibility of the cryosphere environment to climate change.

Double-click here to add your own text.

Jourmet is one of the Chang Pa Nomads who lives in this area the whole year. They live so close to nature that they experience the climate change immediately. Their whole existence depends on the circle of seasons.

Climate change projections suggest that all areas of South Asia are likely to warm by at least 1 °C by turn of the century, while in some areas the warming could be as much as 3.5 to 4 °C. The lives and livelihoods of the Third Pole region population is challenged because of climate change, and the security and development of the region impacted by the Third Pole is in peril, which will have ramifications for the entire continent and globally as well. However, there is less awareness of this risk, and its potential fall-outs, besides the impacted region; a special mission is required to increase attention about the fragility of the mountain social-ecological set-up.

The Third Pole region has enormous socioeconomic and cultural diversity; it is home to many different ethnic communities speaking more than 600 languages and many more dialects. It is endowed with rich natural resources and contains all or part of four global biodiversity hotspots. The mountain resources provide a wide range of ecosystem services and the basis for the livelihoods to the 210 million people living in the region, as well as indirectly to the 1.3 billion people --one fifth of the worlds’ population -- living in the downstream river basins.

More than 3 billion people benefit from the food and energy produced in these river basins that have their origin in the mountains.